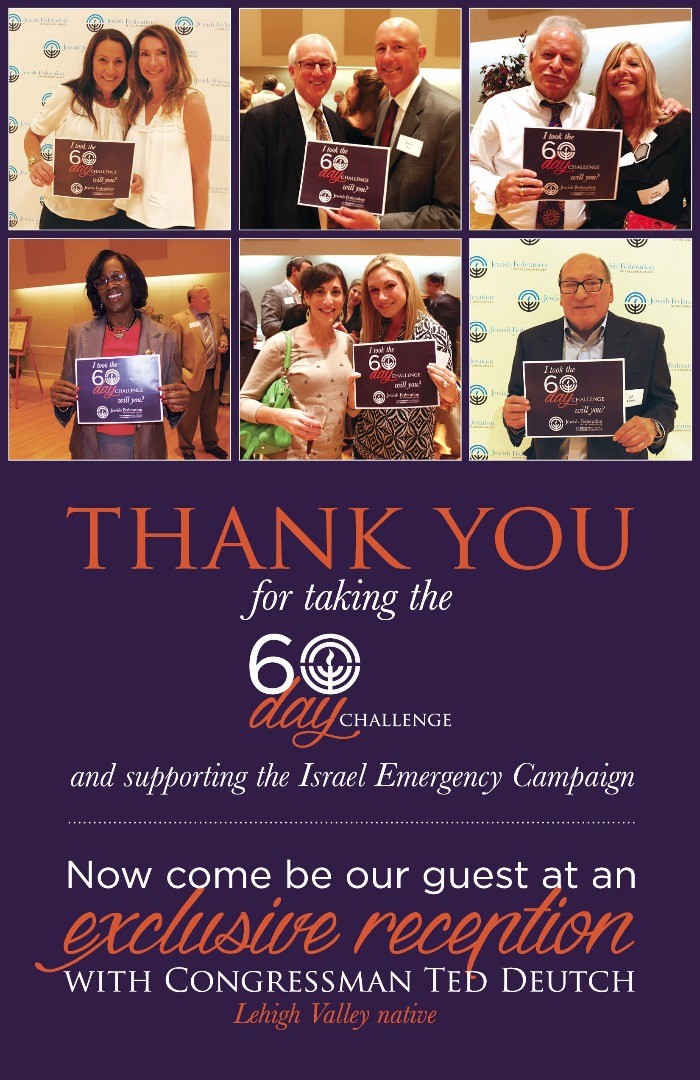 As a thank you for taking the 60 Day Challenge and supporting the Israel Emergency Campaign, the Jewish Federation invites you to be our guest at an exclusive reception with Florida Congressman and Lehigh Valley native Ted Deutch.

Ted first gained national recognition in the Florida State Senate when he helped to pass the nation’s first law mandating that public pension funds not be used to advance Iran’s illicit quest for nuclear weapons.  His work led to an invitation to give testimony before Congress on Iran sanctions, strategy discussion with Israeli Prime Minister Benjamin Netanyahu, and eventually, his own legislation in the House of Representatives to crack down on companies that financially support Iran’s nuclear weapons program. Ted is also the author the U.S. – Israel Missile Defense Cooperation Act and the U.S. – Israel Strategic Partnership Act, bipartisan legislation that passed the House with over 400 votes.

In Congress, Ted is a senior member of the House Foreign Affairs Committee, where he currently serves as the Ranking Member of the Middle East and North Africa Subcommittee. Ted has led efforts in Congress to urge the EU to designate Hezbollah a terrorist organization and to fight against international efforts to delegitimize Israel at the United Nations. Ted recently authored a resolution that passed the House unanimously condemning Hamas’ use of civilians as human shields.

First elected to Congress in 2010, Ted is also a member of the House Judiciary Committee and the Ethics Committee. Ted has been spotlighted by the Washington newspaper Roll Call as a young, rising voice in the House Democratic Caucus and was named one of America’s top 10 Jewish politicians to watch by the Jewish Daily Forward.

Born and raised in Bethlehem, Pennsylvania, Ted is the youngest son of Jean and the late Bernard Deutch.

Haven't taken the challenge yet? Don't worry, there's still time!
Make your pledge to the 2015 Campaign for Jewish Needs by calling 610-821-5500 or donate now. You will also have an opportunity to pledge at the event.

RSVP for the Major Donor Dinner with Congressman Deutch at 5:30 p.m. (open to households that have made a minimum pledge of $5,000 to the 2015 Campaign for Jewish Needs or the Israel Emergency Campaign).